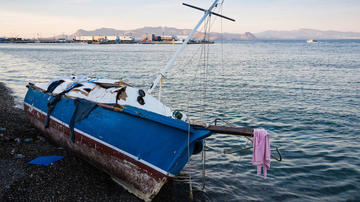 "Marie Darrieussecq’s work has long been peopled with outcasts, misfits, phantoms, or those with an uncertain status living on the margins of society. Her international bestselling debut Pig Tales (1997) traced the destiny of a beautician who metamorphoses into a pig and is tragically tracked down for embracing her animal nature. Her most recent futuristic tale, Our Life in the Forest (2017), concerned a woman fleeing the city to live in the woods. Her latest book, La Mer à l’envers, takes a more topical turn: the migrant crisis.

The novel tells of the encounter between Younès, a teenage migrant who has fled Niger, and Rose, who previously appeared in Clèves (2011) and Il faut beaucoup aimer les hommes (2013). Rose is a psychologist with New Age healing powers who is going through a midlife crisis: should she leave her likeable but alcoholic husband to move back to the Basque country, or stay in over-populated Paris? She embarks on a Mediterranean cruise with her two children for some time off. During the night of Christmas Eve she witnesses a shipwreck, with migrants being hoisted up onto the deck only to be sent off in police boats before the other passengers can wake up. “‘No pasa nada, niente, nothing … Tutto bene”, smiles one of the ship’s officers as he moves the passengers along. Rose, however, catches Younès’s eye and instantly feels a maternal instinct to help. She gives him her son’s iPhone, a gesture that will form their bond..."  (read the review on the TLS website)