‘Art, science and Democracy for a Plural World on a Challenged Planet’ 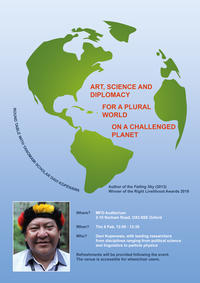 The Round Table will take inspiration from Davi Kopenawa’s co-authored The Falling Sky to debate projects of ‘enlightened localisms’ that call for new ways of thinking about world civilization. Participants will address the central question: How do difference and equality make us more human?

Very rarely do members of the part of humankind Jean Malaurie calls ‘les peuples racine’ (literally, ‘groups who have put roots down,’ that is, autochthonous peoples) have the opportunity to converse with literary critiques, political scientists, or particle physicists. Could a Yanomami creation myth inform the early universe cosmology of modern science? Would knowledge of supernovae and dark matter affect indigenous understandings of the cosmos? What could British diplomacy gain from shamanic diplomacy, and how could a shaman from the Amazon convince a western diplomat that ‘somos territorio’ (‘we are territory’)? At a time when the urgent moral claims of distinct and distant others are on the increase, what role could rooted cosmopolitanism play? And what is the significance of roots in a world where the rights of other-than-humans are being voiced? Can native Amazonian ontologies help with literary translations in an era defined by the climate emergency? Under what conditions could universal and particular criteria of beauty and perfection inform one another?

Davi Kopenawa is an author, philosopher, spiritual leader, linguist, educator and spokesperson for the Yanomami people. He was awarded the United Nations Environment Program’s Global 500 prize in 1988 and received the Right Livelihood Award (also known as the “Alternative Nobel Prize”) in 2019. He belongs to the team of Yanomami researchers involved in the ceremonial dialogues project (PDDCY, Projeto de Documentação dos Diálogos Cerimoniais Yanomami). In 2013, he was invited to join the Faculty of Education at UFMG (Universidade Federal de Minas Geiras, Belo Horizonte, Brazil) as Visiting Lecturer. He also has academic connections with UFMG’s Department of Anthropology, CEDEPLAR (Centre for Development and Regional Planning in the Economics Faculty) and IEAT (Institute for Advanced Transdisciplinary Studies). His scholarly activities address a range of key decolonial interests, including: diversity and inclusivity; race and resistance; global Brazil; ecologies of knowledge and practice; imagining the divine; introducing diversity in university curricula.

Davi’s collaboration of thirty years with Franco-Brazilian anthropologist Bruce Albert resulted in the 2010 publication of the acclaimed La Chute du Ciel. Paroles d’un Chaman Yanomami (Collection ‘Terre Humaine’ at Editions Plon). The book was translated into English and published by Harvard University Press in 2013. The two translators, Alison Dundy and Nicholas Elliott, won the 2013 French American Foundation Translation Prize in Non-Fiction (see Alison Dundy’s interview at www.frenchamerican.org/alison-dundy/). The book has been described as a textual duet. The two authors worked together as one, and came to inhabit the same ethnobiographic ‘I.’ In the narrative mosaic they created through empathy and lyrical depersonalisation, interculturality extinguishes the privileged position of seeing without being seen.

Yanomami cosmology as articulated by Davi Kopenawa and the master shamans of Watoriki with whom he trained was a central inspiration for the exhibition Yanomami, Spirit of the Forest organised by the Fondation Cartier pour l’Art Contemporain in Paris in 2003. It profoundly influenced the thinking of Eduardo Viveiros de Castro, a leading Brazilian anthropologist and philosopher whose theory of perspectivism has revolutionized cultural and post-colonial studies over the last twenty years. Kopenawa’s and Albert’s ethnographic achievement is an inspiration for all contemporary anthropologists.