Book discussion workshop: ‘The Prosthetic Tongue: Printing Technology and the Rise of the French Language’

With the author Katie Chenoweth (Princeton) 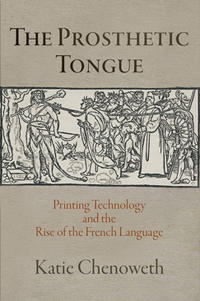 The TORCH Writing Technologies Network welcomes Professor Katie Chenoweth (Princeton) for a discussion of her book The Prosthetic Tongue: Printing Technology and the Rise of the French Language (Penn, 2019). After a presentation by the author, we will move to a workshop discussion of the book and the questions it raises, particularly around the relationships between language, technology, and the human body in the early modern period.
Participants with Bodleian Libraries access can read the book online through SOLO, though this is by no means a prerequisite to attending the workshop, and nor is familiarity with sixteenth-century French in particular; all quotations are provided in English translation, and anyone interested is welcome to attend.
Further details and registration at the link below:

What is the relationship between a metaphor and a machine? What concerns does an architectural manual share with a handbook of poetic theory? How did ground-breaking early modern scientific innovations—from anatomical drawings and the astrolabe to quantitative physics and chemical experiments—affect poetic and theatrical production and, inversely, how did scientists rework ancient literary techniques in bringing their writings and experiments to the attention of new publics? Writing Technologies explores shared literary and scientific forms of crafting and experimentation; the various editorial strategies deployed by the inventor-as-author and author-as-inventor; and the role of the imagination, and of literary-artistic technologies such as analogical figures, metaphors, sketches, and drawings, in scientific invention.

Writing Technologies will bring together a range of international contributors, engaging with inventions developed within – as a non-exhaustive indication – (Middle-)Eastern dynasties, empires, and shogunates, alongside the European innovations that both facilitated and were called into question by transatlantic travel and colonial expansion. Through interdisciplinary cross-readings of literary works and texts on techniques and inventions in the ‘brave new world’ of exploration and experiment, we examine the mutual impact of scientific, technical, and literary writings in early modern culture. Our investigations approach questions of materiality through the collaborative opportunities afforded by digital media, aiming to develop a cross-disciplinary early modern perspective on urgent questions for scholars of culture and science alike.