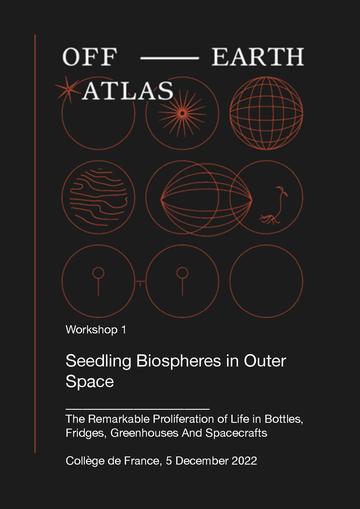 The Remarkable Proliferation of Life in Bottles, Fridges, Greenhouses And Spacecrafts

Along with astrobiological research into the possibility of life elsewhere, space exploration has led contemporary researchers to extend the limits of life beyond Earth. At various scales, technical devices have enabled them to make key processes such as nutrition and respiration work in very different conditions. At the same time, they have acquired considerable expertise in sustaining non-human life (micro-organisms, plants, animals …) in artificial environments. The objective of this workshop is to reflect on how such techno-scientific projects — which have in common that they engender veritable ‘micro-worlds’ or seedling biospheres — contribute to the reconfiguration of life-as-weknow-it and perhaps even humanity itself. Registration essential: tinyurl.com/oeaworkshop1

OFF — EARTH ATLAS is a joint project of the University College London (UCL) and the Université Paris Sciences et Lettres (PSL), in partnership with the Collège de France and the Maison Française d’Oxford. It aims to foster a sustained dialogue between anthropology, and the social sciences/ humanities more generally, and all those who are engaged in the ongoing endeavour to explore and exploit outer space.  A series of workshops will cast new light on four key aspects of that emerging dialogue: ‘Forms of Life’ (Paris), ‘Territories’ (London), ‘Architectures and Infrastructures’ (London), ‘Images and Imaginations’ (Oxford). Ultimately, these will result in an Off Earth Atlas, containing some fifty images and graphs accompanied by short texts.