Organised as part of the seminar New Imaginaries of Migration. 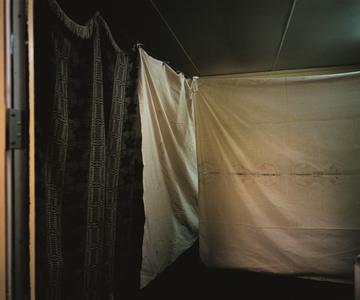 A film by Mélanie Pereira
'Places of Absence'

"Choosing to deal with a subject such as the Sangatte hangar means bringing together in one project my concern as a historian, my desire as an artist, and my emotion as a citizen.
It is to Paul Virilio, with whom I had just produced the book "Chambres précaires" (Precarious rooms) on the premises of the Samu social in Paris, that I owe the energy it took to launch myself into this work, and to the University of Arras, associated with the Maison des Arts de Sallaumine, the immediate interest that made a first exhibition possible.
The French Red Cross, in the person of Michel Derr, director of the Sangatte centre, gave me a warm welcome; the subject was not yet in the headlines. Paul Virilio said that we were facing the beginning of a phenomenon that would characterise the 21st century and which was that of a great wave of migration from poor countries to rich countries; and I thought as I imagined the hangar: what does this look like? what measures has the society in which I live implemented to tackle such a problem? For I am indeed of that time and of that world, partly responsible, and if I am not forced into exile today, it is only by chance."

Presentation of the project at the Cité de l'Immigration (extracts)

Created in 1999 as an accommodation and reception centre, the Sangatte centre occupies an old hangar built at the time of the construction of the Channel Tunnel, which stored the equipment used for the construction site. Originally intended to accommodate 200 people, the Red Cross estimates that 67,000 people passed through the centre in three years: the centre housed nearly 1,500 illegal immigrants every day, mainly from Afghanistan, Iran and Balkan Europe. It closed in November 2002 following a decision by the French authorities..../
These images of the real and the material reveal the living conditions of the camp, and also suggest what they do not show: the people; the refugee, the clandestine. Images of absence, lack and destitution reveal the hopes of the temporary inhabitants of the camp.
The work functions in the mode of paradox because the centre is overcrowded at the time the photographs are taken: the misery and the very difficult living and transit conditions appear without those who suffer from them being shown. This choice by the artist allows us to imagine, without showing them and without any miserabilism, those we do not see, and the place itself appears in all its "ingratitude and precariousness", in the words of the art historian Dominique Baqué. The word “discretion" has often been used to describe the search for accuracy and neutrality that characterises Jacqueline Salmon's photographic work

Jacqueline Salmon was born in 1943.
Since 1981, she has been producing photographic work of a social nature whose main subject is the study of the relationship between philosophy, art history and architecture.
She is represented in major public collections in France and in many museums abroad. She has also produced permanent installations within the “artistic 1%” framework for the Bibliothèque du Vercors in Die, the DRAC (Regional Direction for Cultural Affairs) of Rhône-Alpes in Lyon, and the Palais de Justice (courthouse) in Melun.
She is passionate about publishing and has written several works in collaboration with philosophers and writers: Hubert Damisch, Jean-Louis Schefer, Paul Virilio, Jean-Christophe Bailly, Georges Didi- Huberman...
In 2021, Loco Editions published the monograph Futurs antérieurs, which puts into perspective 40 years of her work.
Her latest work is currently presented at the Musée Réattu during the Rencontres de la photographie in Arles.
She is represented by the Eric-Dupont gallery in Paris.

In Pereira's film, hands have the leading role. These hands wonder what they might have in common with the hands covered in cement, mud, and dust, wearing blue construction gloves and yellow cleaning gloves. Hands that, instead of building houses, open windows, repeat images, stretch sounds, build films. Most of all in her film, hands are universal. They bridge exiles from now and then, from here and there.