'Double standards. What if an event happens not once, but twice?' 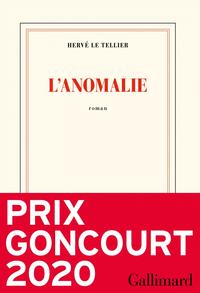 A mathematician by training and an Oulipian writer by trade, Hervé Le Tellier enjoys playing with numbers as much as with words. In one of his early short stories, a man reordering his bookshelves finds that all titular numbers have gone awry. The Three Musketeers have become The Four Musketeers, with an unsavoury supernumerary called Golias added to the trio. And this variation brings many more puzzling results: Antoinette Fouque’s feminist classic becomes There are three sexes; historical confusion spreads with books on the Fourth Reich and the Third World War; Freud’s Five Lectures on Psychoanalysis counts an additional one on paranoia, of course.

In his new offering, L’Anomalie, which has just won the Prix Goncourt, Le Tellier applies the classic Oulipian plus-one permutation to a striking thought experiment: what if an event happens not once, but twice? To preserve readerly pleasure, this narrative ploy is only revealed halfway through, as the novel sets out following a dozen characters whose journeys cross when on March 10, 2021 they happen to be on the same Paris–New York flight, caught in unmapped cumulonimbus with massive air pockets. The pilot in command, David Markle, has never experienced any turbulence that dramatic but, miraculously, they come out unscathed. Among the passengers we meet is Blake the professional hitman, en route to a mission, who otherwise leads a perfectly respectable family life. Another, Victor Miesel, is a minor writer, the author of Des échecs qui ont ratés (Screwed-up failures) and translator of Waiting for Godot into Klingon, about to pick up a translation prize. Profoundly shaken by this near-death experience, he sets out to write a novel, L’Anomalie, his final piece of melancholy meditation before he puts an end to his own life. There is also the precocious Sophia Kleffman. She displays an encyclopaedic knowledge of amphibians and suppresses a dark secret about her father, a veteran of the Iraq war...