The Quill Project. Understanding how constitutions and laws are written 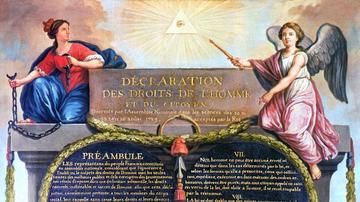 The Quill Project exists to study the negotiation of law in formal settings, and especially the creation of constitutional law through constitutional-convention based processes.

Based on a study of three hundred years of parliamentary manuals and an adaptation of algorithms developed to support multi-user text editing, Nicholas Cole and his team have developed a digital platform that can—where the necessary records exist—reconstruct the paperwork available to participants at each stage of the negotiations, allowing proposals made and votes taken to be understood more easily within their contexts.  The project continues to refine this technology and to create bespoke visualizations, data-mining, search, and comparison tools that enable these processes to be better analyzed, understood, and presented.

The Quill Project’s software was originally developed to study the creation of the American Constitution in particular, but the platform was also designed to be a generic tool for the study of formal negotiations, and from the beginning, it was conceived to handle non-English texts.

Three French interns were selected by the Maison Française in 2018 and again this year in 2020. They used the Quill technology to study the records of the National Assemblies during the French Revolutionary period. The idea was to put a model of the work of these assemblies online to facilitate comparative work on France and America in this period.
More information can be found here: https://www.quill.pmb.ox.ac.uk/french-national-convention-1789

Here is some feedback about the 2020 interns' experience:

"As a student at Sciences Po Aix-en-Provence, I have been working since June 29th on an internship at the Maison Française d'Oxford (MFO) with four other students on the Quill Pilot Project, which aims to better understand the political decisions taken during the 1789 Constituent Assembly in France and the drafting of the Declaration of the Rights of Man and the Citizen (DDHC). Although it is carried out via telework, the work required for this internship remains challenging and effective. Nicholas as well as Lauren ensure that the conditions are optimal and make the setting pleasant.

All four of us are students at the Institut d'Etudes Politiques (IEP), a training institute that provides training for the missions entrusted to us. Indeed, the IEPs train in social sciences, history, languages but also provide computer courses. Thus, the internship offer of the MFO corresponded to my profile and fulfilled the objectives of a six-week internship set by my IEP for the validation of my diploma. Before joining this political science program, I also spent two years in a literary preparatory class. This course allowed me to optimize my writing and analytical skills, which are essential for the realization of our internship at the MFO.

How does the internship take place in teleworking?

It is a six-week internship. The first week was devoted to getting to grips with the software and the research process that we carry out. During the first week, we had video conferences with Zoom every day, each time specifying a little more precisely the missions we had to carry out, in English of course.

At the end of the week, we were already much more at ease and we concluded the week by holding a meeting between the trainees this time in French, to agree on the distribution of our work and to clarify a few points that could still have been clarified.

Today we continue to work with deadlines, and by holding Zoom meetings with our internship tutors when necessary. We also communicate via the Mattermost messaging system when we encounter a difficulty. This way, Nicholas and Lauren are always available to answer our questions, which has saved us from wasting time on any difficulties we may have encountered.

The reading of the original texts of the parliamentary debates, which at first sight might seem to me to be rather inaccessible, ends up following a logical and completely understandable sequence. This approach makes it possible to place oneself unexpectedly at the forefront of the work of historians and provides a more precise understanding of the decisions that led to the French Revolution.

Thus, the line of research devoted to digital humanities is particularly interesting since it combines what I like and what I am learning: culture and digital. I do not regret in any way the realization of this internship in which I am professionally fulfilled. Although the realization of the internship takes place in the distance, the contribution remains considerable on my side, and we should finish the project without too much difficulty in the time allotted."

"I am a postgraduate student in politics at Sciences Po Lyon (France). I’ve been part of the internship supervised by the Pembroke College about the Quill Project. This internship has taken place this summer. The Quill Project is a software (experimental at this stage) which aims at transcribing Parliamentary debates that precede the adoption of some important legislations in the Western History such as Bill of Rights, The Constitution of the United States or more recently the Withdrawal Agreement. These transcripts have to be as accurate as possible. My assignment alongside three other French Interns was to transcript the debates that have occurred within the French National Assembly before the adoption of the Declaration of the Right of Man on the 26th of August 1789. The debates that we have related on the Quill platform took place between January and August 1789. In order to give the most accurate account of the process of writing of the Declaration of the Right of Man we have used the French Parliamentary Archives and a newspaper entitled Le Moniteur Populaire (a newspaper of the revolutionary period which gave accounts of Parliamentary debates) as documentary sources. I have found this work hugely intellectually stimulating as I am keen on Political Philosophy and History. Unfortunately this internship took place remotely due to the Covid crisis so it required a specific organisation. On a typical day we (the four French Interns) had a morning briefing with our supervisors via Zoom to ask them some questions about the software or about history facts. Then each of us worked on its assignment (we have divided the work between us). Our work consisted in researching Parliamentary debates regarding the Declaration of the Right of Man within the source materials and then to enter the datas we’ve just collected in the Quill platform. As all of us were quite involved in this project and had a satisfactory working rhythm we have finished our Quill collection about the Declaration of the Right of Man. However our work is not publishable as seen as some proofreading and History fact checking have to be carried out before considering publish it on the Quill platform.

To conclude I am very grateful to the MFO for giving me the opportunity of carrying out this internship, I couldn’t ask for a better internship. Indeed, I wish to become an university lecturer and researcher in the field of political philosophy so this internship has enabled me to become more familiar with the academic research and to acquire a substantial knowledge about the French Revolutionary Period (a very important period for the History of political thought). Moreover thank’s to this internship I have made the acquaintance of my fellow interns (Lou, Claire and Marie-Laurence). Working with them was very pleasant and furthermore on a personal level it was very delightful for me to make the acquaintance of such interesting and nice people."