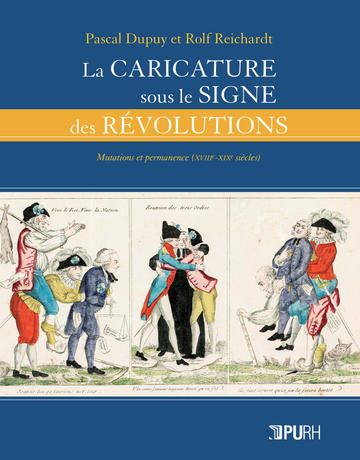 Time.  The People. The Severed Head....  Over the course of nearly one century, starting mainly with the French revolution, a number of the central graphic motifs of European caricature evolve and adapt to the political context of the time.  Pascal Dupuy and Rolf Reichardt, historians of the French Revolution, caricature and its political imaginary, have just published a new and original interpretation of the tropes and visual codes of political caricature in the century following the revolution. In La caricature sous le signes des révolutions (Presses Universitaires de Rouen, 2022), more than 180 illustrations are closely examined in order to bring out their import and evocative power. The authors trace motifs such as the Throne, the Tricolour, the Menagerie... through their various transformations, mutations and multiplications, revealing how they evolve with the political and social changes of the era.  A strikingly new visual and political history of the end of the 18th century is revealed through their research. It is with pleasure that we welcome one of its authors, Pascal Dupuy, senior lecturer at the University of Rouen Normandy, to present it to us.