BOOK PRESENTATION 'The Last Great War of Antiquity', with the author James Howard-Johnston 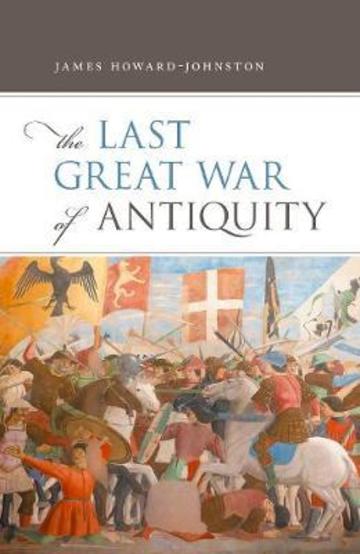 Please note that this event will take place at the Maison Française d'Oxford and that it will also be live-streamed on Zoom. To join the online webinar, please follow the link https://us06web.zoom.us/j/84976793119?pwd=VlF3MXp6Wndtd3BVMGZGaXlzNlR1UT09

The Oxford Centre for Byzantine Research and the Maison Française d’Oxford invite you to a discussion and celebration of 'The Last Great War of Antiquity' (OUP: Oxford, 2021)
With the author, James Howard-Johnston
Discussants: Constantin Zuckerman, Vivien Prigent, and Phil Booth

The last and longest war of classical antiquity was fought in the early seventh century. It was ideologically charged and fought along the full length of the Persian-Roman frontier, drawing in all the available resources and great powers of the steppe world. The conflict raged on an unprecedented scale, and its end brought the classical phase of history to a close. Despite all this, it has left a conspicuous gap in the history of warfare. This book aims to finallyfill that gap.

The war opened in summer 603 when Persian armies launched co-ordinated attacks across the Roman frontier. Twenty-five years later the fighting stopped after the final, forlorn counteroffensive thrusts of the Emperor Heraclius into the Persians' Mesopotamian heartland. James Howard-Johnston pieces together the scattered and fragmentary evidence of this period to form a coherent story of the dramatic events, as well as an introduction to key players-Turks, Arabs, and Avars, as well as Persians
and Romans- and a tour of the vast lands over which the fighting took place. The decisions and actions of individuals-particularly Heraclius, a general of rare talent-and the various immaterial factors affecting morale take centre stage, yet due attention is also given to the underlying structures in
both belligerent empires and to the Middle East under Persian occupation in the 620s. The result is a solidly founded, critical history of a conflict of immense significance in the final episode of classical history.

The MFO is delighted to offer cheese and wine following discussion of the book.