CONFERENCE 'Plants and Food in Transit: The Circulation of Botanical and Agricultural Knowledge Between the British and French Empires' 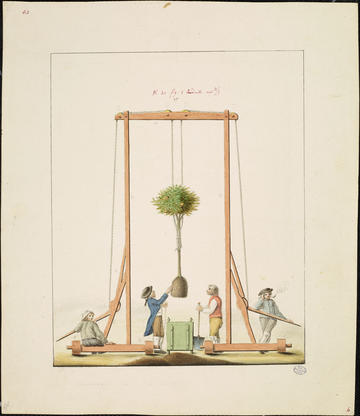 People and plants were on the move in the eighteenth century: agriculturalists, seedsmen, nurserymen, and gardeners undertook international travel to visit farms and nurseries, collect specimens, and assess the respective merits and failures of cultivation practices in different climates. The circulation and appropriation of knowledge during this period has provided global and imperial history with a rich array of resources to produce global histories of science and the environment. The political and economic consequences of food shortages, famines, and dearth, which accompanied the expansion of both the British and French empires in the eighteenth and nineteenth centuries encouraged cornucopian visions of a world rationally cultivated that could escape such disasters. The privatization of knowledge, recipes, and botanical species characterize commercial and state practices during this period, as the value of plants promised both solutions to provisioning the empire and also to spread happiness and contentment with imperial rule. This colloquium hopes to bring together research on agricultural history, botany, and food science in order to address the following themes:

Jointly organised by John Lidwell-Durnin  (University of Exeter) and Laurent Brassart (Université de Lille ; visiting researcher at the MFO), with the support of the Maison Française d’Oxford and its centre for the history of science, the colloquium will reinforce the integration of French researchers and their British counterparts in a research group focused on the economic, cultural, and social aspects of European botany.

Semih Celik (University of Exeter), Spreading the Seeds of Prosperity: Dr James Bolton Davis’ Model Farm in Constantinople (1847-1851)
In 1846, Reshid Pasha, the grand vizier of the Ottoman Sultan Abdulmecid, asked the president of the USA James K. Polk to send an expert that would give instructions in American cotton growing methods in the Ottoman territories. Following the president’s advice Dr James Bolton Davis, a South Carolina physician and expert in scientific agriculture, was commissioned to start a model farm in the outskirts of Constantinople. The farm aimed ,in the words of the Ottoman sultan, “to spread the seeds of prosperity across the empire.” Whereas it is doubtful whether the model farm project achieved its purposes, this short-lived experience (1847-1851) created a hub for the circulation of seeds, people, and animals across space, as well as a means for debating the role of climate and human agency between the agents of empires worlds apart.

James G. Lees, (2nd Year DPhil Student, Trinity College, Oxford), Uprooting the Forest: Sir John Wentworth and State Forestry Surveys in North American Colonial Land Granting Policies, c.1760-c.1800
In eighteenth-century North America, naval timber was a prized and highly contested resource whose harvest the crown restricted using legislation undergirded by surveyed boundaries - boundaries which were equally powerful legal weapons in the hands of colonists. This paper examines how starting in the mid eighteenth-century, colonial administrators deployed pre-settlement resource surveying to fortify crown claims to woodland, with particular attention to the implementation of this new policy during the career of Sir John Wentworth.
As both governor of New Hampshire and Surveyor General of the Woods in North America, Wentworth oversaw the creation of a cartographic forest surveying bureaucracy to counter private claims to timber on unsettled lands. Following the American Revolution, Wentworth extended this policy trajectory in the comparatively sparsely populated region of Nova Scotia, where he performed a variety of pre-settlement surveys that both assessed timber quality broadly and used cartographic surveying to reserve parcels of woodland to the crown. Simultaneously, during the post-revolutionary influx of loyalist emigres to the province Wentworth championed the careful restructuring of the legal and procedural intricacies of land granting to secure state resource sovereignty while recognizing the practical needs of colonists, crystallising an administrative innovation later exported to the Canadas and New Brunswick in the closing decades of the eighteenth century.
Ultimately, the introduction of pre-settlement resource surveying in newly colonized regions had the effect of creating landholding paradigms geared toward absolute state resource sovereignty. This paper is part of ongoing doctoral dissertation research into the development of early modern state forestry practices in Britain and North America, c.1600-c.1800.

Laurent Herment (CNRS. Centre de Recherches Historiques UMR 8558 EHESS-CNRS), Mandioca/Manioc/Cassava: Between hopes and disappointments: How to transform a marginal plant into an industrial endeavor: French Colonial Empires and Brasil.
Manioc, originated from nowadays Brasil. It played a crucial role in the Imperial expansion during the modern area: first as a source of starchy material for conqueror when they settled in coastal area of Brasil, second as a foodstuff for long journey (within new regions or for sailors). Portuguese, French, Dutch, but also English, without any doubt, learned from native peoples the way to crop, and first and foremost the way to process this plant which could be venomous (lethal). From South America mandioca expanded in tropical Asia and Africa. This is not my purpose to examine this process of expansion which are more or less rapid during the modern area and 19th century, and lasted in certain until the 20th century.
This communication aims to examine the long and chaotic process by which several colonial empires (French, Dutch and English) and Brasil tried to transform, between the end of the nineteenth century and the WWII, manioc as “cash crop”, at a time when Europe faced a need of starch to support the Industrial Revolution, and search cheap food and alcohol to feed its population.
In this very preliminary work I shall analyse the French knowledge that came from all part of the world, and especially from Java, Brisith Malaysia, but also Brasil. I also devise the effort of Brasil to export what is perceived since the end of the nineteenth century as a potential cash crop beside sugar cane, cocoa, and, of course, coffee but also rubber even if its last product never became really a cash crop.

Emilie-Anne Pépy (Maître de confèrences en histoire moderne,Université Savoie Mont Blanc, LLSETI), The role of tourism in the circulation of arboricultural knowledge and know-how between England and France in the 18th century.
The aim of this paper is to study travel accounts of members of the French nobility or aristocracy in England, which can be linked to other documents from private archives. It is thus possible to better understand the circulation of fashions in garden design and agronomic improvements, and their translation into space through the acclimatization of new plant crops.

Laurent Brassart (Maître de confèrences en histoire moderne, Université de Lille, IRHiS UMR 8529), How to disseminate arboricultural knowledge and foreign horticultural species throughout the territory of the Napoleonic Empire?
This paper will aim to present the centralised organisation set up by the Napoleonic State's agricultural office to collect and disseminate new knowledge in arboriculture throughout the territory of the Empire. From scientific institutions to schools, It will highlight the successes and limitations of this organisation of knowledge.

Thérèse Bru, (Chercheuse en histoire moderne associée IDHE.S UMR CNRS 8533), Value and proprietary status of collected botanical data between the British and French empires (18th-19th c.)
The multiplication of scientific travels since the mid-18th century has created a context in which every collected botanical specimen can carry potential useful applications, while the total mass of data is increasingly growing, but disseminated between several levels of organization and regimes of property (from individuals to empires). Evaluating the value of each object or piece of data in transit has become crucial to the very functioning of information circulation between these levels, in increasingly global networks of scientific transactions.
But when applications are a potentiality, or aren't immediately obvious, how can a (relative, but sometimes monetay) value be attributed to what is still abstract information, thus inserting it in exchange relations? We show that any relative value given to botanical information exists in relation to both the data structures found in nature, and to the potential links in communication networks. While novelty is becoming a strong marker of value and interest with the emerging publication market, the status of the 'new' is itself dependent on the correlations that can be established with the pre-existing mass of data. The value of information thus finds itself closely related to the notion of proprietary regimes of data collection and correlation, and to the relative strength of data accumulation in instances ranging from individuals, to commercial interests and national repositories.

John Lidwell-Durnin (Lecturer, University of Exeter, History of Science), The Exact Measurement of All Lands: Bureaucracy, Knowledge, and Famines in Bengal
In 1769, the failure of the monsoon caused harvest failures throughout Bengal. A famine might have been averted, but the East India Company had, for the past five years, been working to take over revenue and tax collection in the country. Many of the Company servants had little understanding of how the economic system utilised in Bengal for producing and trading food, and most economic historians agree that the British greatly worsened the effects of the natural disaster. However, in this paper I will focus attention on the appetite that the British Company servants held for data, as the famine provoked an urgent need for the British to understand the extent of the famine and its economic causes in order to maintain its fragile grip on power in the region. Drawing on work from my forthcoming book, I argue that the British were deeply impressed by the extent of local knowledge on agricultural production, and that the experience of many Company servants during this period would have substantial effects on agricultural philosophy in Britain in the decades to come.