EXHIBITION 'Bell Brochette. The Presidents of the French Republic seen by Steve Bell' 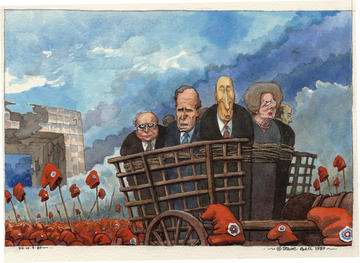 The Maison Française is delighted to welcome the exhibition 'Bell Brochette. The Presidents of the French Republic seen by Steve Bell ' from 26 January to 11 March 2023 (Mo - Fr, 9 am - 5 pm).

Please note that access to the exhibition will be restricted to the entrance hall on the following dates:

Curated by Olivier Auvray, the exhibition brings together more than 60 drawings of the French presidents, from Valéry Giscard D'Estaing to Emmanuel Macron.

Steve Bell has been the Guardian's cartoonist since the beginning of the 1980s and, as such, he was called upon to draw the latest six French Presidents. Through his political cartoons and his comic strip called "If"…" gathered for this exhibition, you will be able to relive, among others: François Mitterrand's adventures with Ronald Reagan or Queen Elizabeth II; the life of Jacques Chirac with John Major or Helmut Kohl; Nicolas Sarkozy's stories with Carla Bruni, Ségolène Royal, George W. Bush or Barack Obama; François Hollande's meetings with David Cameron among others; Emmanuel Macron's experience with Donald Trump, Theresa May, Boris Johnson, Vladimir Putin and, more recently, Jean-Luc Mélenchon! You will also meet Valéry Giscard d'Estaing in the weirdest farm ever, a copycat of Margaret Thatcher's one called "Maggie's Farm".

A word from the curator, Olivier Auvray:
'As a regular reader of The Guardian and a big fan of Steve Bell's cartoons since the early 1980s, I had the opportunity to befriend him around twenty years ago. Later, when I retired and had more time for myself, I asked Steve if he would let me organise a presentation of his work in France to coincide with a British short film festival in Rouen in October 2017. This is how I curated my first exhibition, based on his borrowings to paintings, pictures and photographs. Two years later came a second exhibition entitled "Bell Brochette".'

As part of the opening of this exhibition, we will welcome Steve Bell, Olivier Auvray (curator) and Pascal Dupuy (University of Rouen) for a debate on cartoons and democracy on Tuesday 26 January at 5 pm.