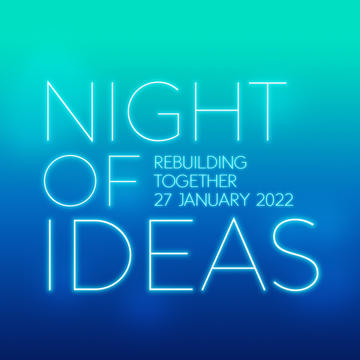 Join the Night of Ideas, a night of thought-provoking and free debates, films, and workshops organised by the French Institute in London on 27 January. Leading figures including writers, philosophers, artists and historians will tackle the latest challenges central to our times and discuss new ways of rebuilding the world together.

Launched by the Institut français in 2016, the NIGHT OF IDEAS is a project staged simultaneously in Paris, London and worldwide, at the end of January. How can we rebuild tomorrow’s world together? On the backdrop of global socio-economic and environmental crises, a collective desire for new initiatives and action is arising. Joining French, British, and European perspectives, the Night of Ideas engages audiences through free debates with 40 leading figures.

Echoing the main themes of this year’s edition, a programme of films and discussions, BEFORE THE NIGHT (21 – 26 January) precedes the series of thought-provoking debates (27 January).