WORKSHOP 'Breathing contaminated air: the history of protective mask as a panacea' 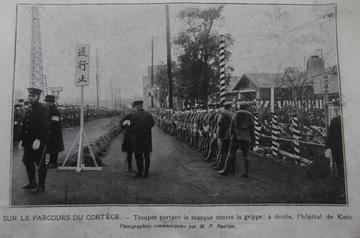 The unexpected appearance of Sars-CoV-2, followed by its global spread at the beginning of 2020, led to the general adoption of individual respiratory protection. The face mask has imposed itself at breakneck speed as a fundamental socio-technical device in our daily lives, on a global scale. The Covid 19 pandemic has brutally reminded our societies that human health remains vulnerable to pathogens and other airborne particles. Although the use of the protective mask seems at first glance to be an individual approach, it is linked to a multiplicity of interconnected issues at a scientific, public health, industrial, economic, social, cultural and, ultimately, political level. This crisis particularly calls into question our societies’ ability to design, adopt, accept and implement relevant protection systems.

The face mask has been part of the arsenal of protection against dust and infectious diseases for centuries. The silhouette of the Medieval Venetian doctor fighting against the plague and protecting himself from the morbid odours with a beak stuffed with aromatic herbs immediately comes to mind. But other protective devices existed previously, particularly in the context of artisanal and then industrial work. During the 18th century, a significant amount of research was carried out on protective devices against dust and "miasmas". The perception of air sanity evolved with further studies on the physiological phenomenon of breathing.

In the medical and hospital sphere, masks, ventilators, respirators, and diving suits have constituted a material arsenal whose evolution is itself subject to the transformations of scientific knowledge and social practices, and which was later adopted in highly polluted workplaces (mines, chemical industries, etc.). The general adoption of masks corresponds, in many respects, with the process by which a modern medicalized and hygienic society has medicalized and managed risk since the end of the 18th century.

The international workshop Breathing Contaminated Air: The History of Face Masks as a Panacea aims to reflect on the uses of individual protective masks from a long-term perspective. It tackles various contexts of face-masking, such as work, contagious diseases, and armed conflict, examining efforts to present masking as an effective, sustainable, relevant, and acceptable protective response. More broadly, the workshop aims to investigate to what extent the use of personal protective masks can be a component of nosopolitics (or, politics of the categorization of disease), and, as such, belongs to a more general process of “establishing mechanisms for medical administration, control of health, hygiene or food”.

12:00 – 13:00 –Panel 2: Skills and practices of personal protection
chair Erica Charters (Oxford)
- Berny Sebe (Birmingham) 'The Mother of All Masks? The Tagoulmoust of the Tuaregs in the Sahara'
- Shelley Castle (Oxford) 'The First World War respirator: the race for survival'

2 : 15 – 3:15 pm – Panel 3: Masks: a panacea in the time of Covid?
chair Laure Humbert (Manchester)
- Mark Harrison (Oxford) 'Faceless: masks, identity and resistance in the UK during the Covid19 pandemic'
- Ian Griffiths (Oxford) 'How can mathematical modelling be used to find the optimal face mask?'