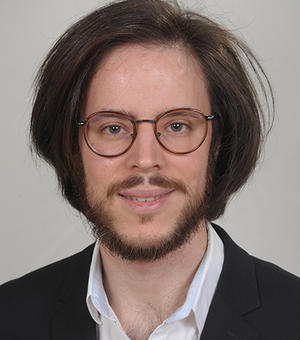 Please tell us about your research project.

In my research, I focus on the first Greek testimonies on Islam, namely John Damascene’s Heresy 100 and Abu Qurra’s Dialogues with a Muslim. These two authors, who lived in Syria and Palestine in the 8th and 9th centuries, saw the rise and establishment of Islam as a major religion and, as Chalcedonian Christians following Byzantine Christianity, reacted to it in their writings.

Their texts have a striking stylistic feature that is unusual in the theological literature of the time: they are humorous and use lampooning and mockery to satirize Islam. At this stage of my research, I aim to describe the literary workings of the production of satire, notably thinking about what habits or discourses of the targeted religion these authors chose for their attacks and what tools were available to them.

In the second stage, I’ll broaden the scope of my research by drawing conclusions from my descriptive analyses. I’ll reflect upon the implications of the usage of humour and laughter in interfaith dialogue to better understand how religion was considered in the early middle ages in the East. I’ll also be able to provide a new understanding of key testimonies on early Islam.

My work combines methods and knowledge from various fields, including Philology, Linguistics and Anthropology. My final dissertation will offer a new translation of the Heresy 100 and the first French translation of Abu Qurra’s Dialogues with a Muslim. It will also include a commentary on the texts and a theoretical part on humour and its potential input in Religious Studies.

Could you please tell us a bit more about your scholarship/exchange programme?

My programme is a PhD contract from Aix-Marseille Université in partnership with the Maison Française d’Oxord. During the three years of the programme, I’ll spend one year in total at the MFO, divided into three visiting periods: three months in the first year for Michaelmas Term, six months in the second year for Hilary and Trinity Terms and three months in the third year.

I find it interesting that Oxford University seems so decentralized. Its different bodies, faculties, and departments are scattered over the city. A part of the education (e.g. tutoring) is done at the colleges, which are partly autonomous and offer accommodation to most students. This way of producing and transmitting college differs from what I’ve been used to in France and Germany.

Oxford University has an active centre for late antiquity (OCLA). It also offers degrees in Late Antique and Byzantine Studies (LABS). This way of outlining a particular period of history that traditionally falls into medieval studies or ancient studies is new for me and relevant to my research.